I am extremely happy that one of the best Norwegian films I've ever seen, will finally come out on DVD in the North American format tomorrow.

I got to see the Swedish movie Men Who Hate Women (known in English as The Girl With the Dragon Tattoo) last night. I was surprised that I could understand about half of it without reading the subtitles, but the movie is so violent I almost couldn't fall asleep afterwards.
Om alle var lykkelige ville vi ikke hatt noe god musikk.
Top

Line Verndal, best known in Norway for her role in the popular TV series Himmelblå, has proven her talents in the film world as well after winning the award for best actress at the annual Amandaprisen ceremony in Haugesund, the Norwegian equivalent of the Academy Awards in Hollywood.

Line Verndal (left) won the Amanda for best actress and Lena Endre
for best supporting actress, both for their roles in the film "Limbo."
Vær snill og rett feilene mine

Here's the link to a nice review of Trollhunter in today's edition of the British newspaper The Guardian. 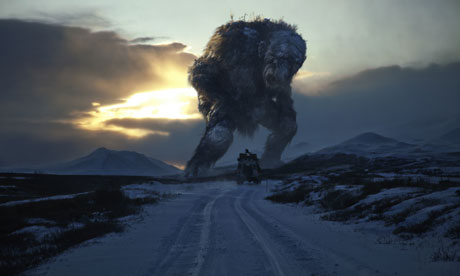 The Jotnar, one of the new breed of fairytale beasties in Troll Hunter

Until Friday 22 July this year, Norway was a country of 5 million people that, even if tried, could never make the headlines. It was a land of stunning scenery, tasty cinnamon buns, slightly rubbery cheese, expensive beer, depressing literature and terrible pop music; a place where, once in a while, someone might cause a fuss by stealing Edvard Munch's iconic painting The Scream from Oslo's National Gallery. But when a rightwing fanatic began his murderous rampage, Norway's image lost a lot of that innocence.

As the country struggles to come to terms with its tragedy, an unlikely ambassador for the real heart and soul of Norway is nearing the UK. Entitled Troll Hunter, this lovely, mockumentary-style, comic fantasy brings the area's centuries-old folklore into the modern day, as a team of student film-makers, investigating a series of illegal bear killings, encounter a mysterious-looking hunter (Otto Jespersen) with a bizarre story.

S09596_ltdenrttekommain.jpg
You do not have the required permissions to view the files attached to this post.
Top

Let the Right One In - Netflix

If you are a Netflix subscriber, you can watch this film "live streaming" on your computer this evening.

I watched the Icelandic film The Sea (Hafið 2002) last week and enjoyed it very much. However, I would suggest being very careful about who you watch the film with, since it portrays one of the most dysfunctional families that I've ever seen in a Nordic film.

Here's the link to one review:

Right now it looks like Norwegian Ninja (Kommandør Treholt & Ninjatroppen) will be the last Norwegian film I will watch in 2011 unless I end up watching Trollhunter (Trolljegeren) once again.

The first "new" Norwegian film I plan to see in 2012 is Happy Happy (Sykt Lykkelig), which will be available from Netflix on 24. januar.

Here's the link to a nice article about this film:

A Norwegian film producer was using words like “grand” and “wild” to describe what it was like to win the World Cinema Grand Jury Prize at the prestigious Sundance Film Festival in Park City, Utah over the weekend. Director Anne Sewitsky’s feature debut won the prize for her film Sykt lykkelig (Happy, Happy). 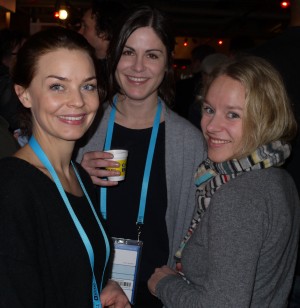 Actress Agnes Kittelsen (left) was in Park City when
director Anne Sewitsky won the Grand Prize at the
famed Sundance Film Festival. At the right is
screenwriter Ragnhild Tronvo.

Norwegian film had a winning year

Never before have so many Norwegian films won so many international prizes as in 2011. And now looms perhaps the biggest prize of all.
Vær snill og rett feilene mine

A film made as the graduation project of a student at the Norwegian National Film School in Lillehammer is among the nominees for the Best Live Action Short Film at the upcoming Academy Awards, better known as the Oscars.

http://latimesblogs.latimes.com/movies/ ... llvar-witzø.html
(Note that this link uses the Norwegian letter "ø" and can't be clicked on directly.

The list of winners at the 2011 Academy Awards was populated with Hollywood big-shots such as Aaron Sorkin and Christian Bale. But also among the winners was a filmmaker just out of film school, and the same could happen this year, as two of the live-action shorts in the running for an Oscar made their way onto the category’s shortlist by way of the Student Academy Awards. One, called “Tuba Atlantic,” earned Norway its first Student Oscar last June.

For those who can not get to the link in post above, here it is shortened

No Oscar for Oskar, but film won fans

A Norwegian short film that was nominated for an Oscar at this year’s Academy Awards even starred a character named Oskar, but didn’t win the much-hyped prize. The film’s young director and his entire team enjoyed a memorable trip to Hollywood anyway.

73-year-old Edvard Hægstad starred in the film "Tuba Atlantic,"
bought a tuxedo and traveled to LA to join in the Academy
Awards celebrations. PHOTO: Filmweb.no

The film starred a 73-year-old amateur actor from Sparbu in Trøndelag, Edvard Hægstad, and the Trøndelag dialect is so strong in the film that subtitles could have been helpful even for other Norwegians. But the heavily “trøndersk” theme in the film forms much of its charm, according to many reviewers.

kotrcka wrote:For those who can not get to the link in post above, here it is shortened