I'm not in the best of health right now, so things have been fairly disorganized as I expected. But here is a recap of what I've been working on this past week:

I'm working through German Quickly with the German study group. I've started a vocabulary Memrise course to review vocabulary and spelling and I'm slowly reviewing the Duolingo German tree. I've started playing Stardew Valley in German when I have the time--there is no audio but it's a decent amount of reading. I may see if I can get the old adventure game Syberia running on Win10 with German audio and interface, or another adventure game with German audio, as that would be more immersive. I literally how hundreds of games on my Steam account, and I'm sure plenty with German language support--it's just I don't think my German listening comprehension is good enough at the moment to play through a game I've never played before.

I did find a couple playthrough by German gamers of Syberia on You Tube. I've played it through in both English and French, but a German playthrough looks like fun:

I'm continuing to play Fallout 4 in French, which I'm enjoying. While I've been in bed, instead of working on my workbook, I've been reading through my copy of TY Improve Your French, which is a little below my current level but it's nice book with good reading selections and dialogues. I also did some review of songs I've learned in past TACs, like this one:

I also got my Duolingo French tree up to a level 2 tree--that just means all the skills are at level 2 or higher. I am slowly going through the tree and picking out some of the best tidbits from the tree and discussions to record in my French journal, as I'm very worried that Duolingo is going to eventually get rid of the volunteer-made French tree--this is, how do I put it lightly....a ton of bullshit. Regardless of the shortcomings of the Duolingo format and Duolingo Inc themselves, the volunteer French team has been one of the most solid teams there since the start and had done more than their part in making Duolingo successful. Some of the people on that team have expertise in the French language that goes far beyond the level of language learning that Duolingo generally aspires to....and that seems to be part of the issue. Duolingo partnered with Pearson (boo, hiss) last year and since then, it seems Duolingo has been gearing up to focus on content for middle and high school students, including creating a staff-made French tree, which from what i hear, is Pearson-level garbage. The volunteer French team consists of people who have a graduate degree level expertise in French and they have geared the French course toward pushing learners to a higher level than whatever Pearson thinks is good enough. It is very doubtful Duolingo will trash the staff-made tree as they invested money into it, unlike the volunteer-made tree. So I fear the volunteer-made tree's days are numbered on Duolingo, along with our access to the help and explanations from this very excellent group of French experts.

(As a side note: along with Duolingo gearing towards more popular languages taught in schools, like French, as well as branching out into the Chinese market, it looks like they will be investing less and less in volunteer-made courses, and that means fewer "non-mainstream" languages like Welsh, Irish, Swahili, Catalan, Indonesian, etc. So if you were hoping one day that there would be a course for whatever language you're interested in, don't get your hopes up. I've never been a fan of Duolingo Inc and I think Luis is barely more than a snake-oil salesman, but this might be my biggest disappointment with the site since I joined the site in 2012. )

I'm on chapter 7 in CW and I'm rereading Cwm Gwrachod. I want to work more on the Duolingo Welsh tree and see if I can get it up to a level 2 tree, like I have with French and Irish, but I know that'll be a ton of work, so I've been avoiding it.

I love Welsh, but I still find it quite challenging at times. I've been trying ot work a little on my 2 Welsh Memrise courses everyday, but I lost my streak in both last night because I wasn't feel well enough to stay up and do them. (Right now I only have my streaks for my main French and Gaelic Memrise course, which are both over 150 days, but sadly I've been too ill to keep up streaks in other courses. )

I'm reviewing Assimil via Memrise, since I don't know where my physical copy of the book is. I think I got to chapter 35 in the book, but that was some time ago. This week I've reviewed chapters 1-12 on Memrise.

Lots of time in bed means lots of time to read through Leabhar nan Litrichean. I'm nearly the end of my main Memrise course, so I started the vocabulary course someone made for Na Speuclairean Dubha, which I plan to read again very soon. This has reminded me of the projects I had started for possible courses for other books, which I will try to get back to this or next week.

EDIT: Forgot to add: I am aware that the movie The Outlaw King is out (kind of hard to avoid the adverts on Netflix), and yep, as I feared, it completely erases Gàidhlig from my very Gael(-Norman) ancestor's story.

I listened to the recordings for TYI1961 chapters 2-9 and I posted my answers to one of the exercises in Chapter 3 in the Irish study group. The recordings for the audio on archive.org are from vinyl (!) so it's side 1, side 2, etc, and side 1 is just chapter 2-9.

But what makes these recordings very useful to me is that they are one of the very, very few audio resources I've been able to find where you can hear the speakers pronouncing the slender R properly. For a long time, I was not certain contemporary Irish speakers used the slender R as we do in Gaelic, because I never heard it in recordings, or if I did, it was only on a few select words. This video, that was posted last year and thus well after I gave up trying to make sense of what the fuck is going on with contemporary Irish pronunciation, clears up my confusion about the slender R and its use--and I apologize for the video's use of a rather racist clip about Asian people speaking English, but this is literally the ONLY thing I have seen that actually addresses why people aren't using the slender R in Irish.

I haven't forgotten about the Powwow it's just nindaakoz (I am sick). I have been working on verbs and constructing basic sentences this week, and it's just a ton of information to get a handle on. I haven't had the energy to sit down and try to type up a coherent post in my Powwow thread about it yet, but I have been working Ojibwe!

Anything else I didn't get to this week, and sadly that includes Japanese and Indonesian, but they will be my two main languages of focus for this week. I hate to do it, but Catalan needs to go on the backburner with Spanish, least until after the Powwow.
Top

In between working steadily and slowly away at reviewing my Duolingo German (and French, Spanish and Indonesian) tree, I got my Irish tree golden (all skills are 100% strength per Duolingo's spaced repetition algorithm). Since Duolingo's website no longer displays this sort of stat on your individual profile, you have to go to duome.eu to check the strength of your tree.

On the Irish profile page on duome.eu, it calculates its stats (shown above Recent Activity widget) from a subset Duolingo users who have had a streak of 100+ days, so it's a much smaller subset of all Duolingo users counted in Duolingo's own "active learners" total, which right now is listed as 980k users. 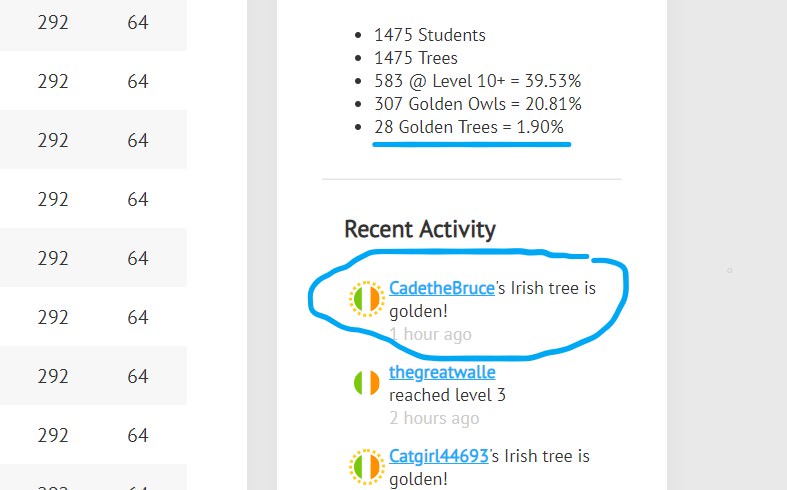 Because I don't have all my Irish skills to level 5 yet, they will still decay at the old Duolingo rate, so I will likely lose my golden tree status on duome.eu in a week or so. But why not celebrate small victories.

EDIT 11/18/18: For various reasons, I will be ending my TAC log here. I accomplished a lot in the 5-6 months I was doing this TAC. But various life circumstances and health issues require me to re-organize my language learning priorities at this point in time and that includes ending my log here.
Top
Post Reply
122 posts