Hey all, I was just reading the W3C specifications on the HTML language tag, and learned about the 3-digit UN M.49 region codes, which allow for localization groups. For example, the attribue es-419 would specify Latin American Spanish. Would it be possible to incorporate this somehow into our language list options? We probably wouldn't need to do this for many regions, but I've always found it, for example, frustrating with Spanish that I have to pick a country (for both my profile and signature) if I'm focusing on Latin American Spanish. I guess the difficulty with using these region codes would be finding a flag to represent each region. What do you guys think?
N:

dEhiN wrote:I've always found it, for example, frustrating with Spanish that I have to pick a country (for both my profile and signature) if I'm focusing on Latin American Spanish.

But what is "Latin American Spanish"? Latin America is a huge chunk of the Americas, and there are all kinds of varieties of Spanish spoken within it. Some of them use tú, some use vos, some use both with a slightly complicated distribution, some use usted more or less often than one of those other two pronouns, some use usted almost universally. Some are influenced by different indigenous languages; some of them only have lexical influence from these languages, others also have grammatical influence. There are even false friends between different varieties of Spanish spoken in the Americas.
Top

What vijayjohn said is true, but there exists a Standard Latin American Spanish used in media, in the radio, in dubbing, etc.
Top

Also, one problem with not grouping and forcing someone to pick a specific country is that it implies things that aren't true. I finally settled on Spain's flag for my profile language list because I felt that every time I chose a Latin American country, it implied I was focusing solely on the Spanish native to that country. I was, instead, trying to focus on the commonalities of Spanish spoken throughout the Americas.
N:

dEhiN wrote:then why is Castillian Spanish and Latin American Spanish generally contrasted against each other

Because it's easier to create resources for two varieties than for all of the ones that exist? I can't tell what "Latin American Spanish" is supposed to mean other than "not Castillian." Even people in Spain don't necessarily speak Castillian.
Top

vijayjohn wrote:I can't tell what "Latin American Spanish" is supposed to mean other than "not Castillian."

I agree with this. The popular tv shows, media, and so on are that are watched throughout Latin America nearly always have regional elements (vocabulary and grammar, not just accent) that mark them clearly as being Mexican, Argentine, or whatever. The scripts are usually written so that any Spanish-speaker can understand them, but that doesn't mean their viewers speak that way themselves. The same is true of written works. Mafalda, a popular comic strip, uses language that is very obviously from Argentina and yet had great popularity throughout Latin America despite the fact that Mexican or Puerto Rican or Venezuelan readers of the comic strip would not speak that way.
The language-learning materials that claim to teach "Latin American Spanish" are usually a sort of generic non-Castillian Spanish stripped of most of the regionalisms that native speakers would use. Honestly, I think you would have a hard time finding any native speaker who speaks Spanish the way those materials present it. They are meant for tourists and language-learners to be able get by and be understood, but that doesn't mean they present Spanish in a way that "native speakers across Latin America" actually speak because there isn't really any such thing.

While looking online to see if that book actually focuses on a specific country or countries, I came across this review:

The book and tapes will teach you how the pronunciation and the meaning of some words differ from country to country on our American continent. It covers some of the basic unique features of the Argentinian and Chilean Spanish as well as some salient features of the Mexican Spanish, Venezuelan, Carribean, Peruvian, and Columbian Spanish. I have much enjoyed the audio-tapes. They are made with the native speakers from these various countries and will help you to comprehend some of the regional dialects of Latin-American Spanish.

In other words it seems that it does not actually attempt to teach a monolithic "Latin American Spanish" or even a generic variety stripped of regional elements, but attempts to cover a range of different regional varieties in one book. And maybe not thoroughly enough... other reviews on the same page complain that

This is a step forward, but in my view is not enough. Within Latin America there are many differences... If we are serious about courses that really teach the language for the country where you go, we cannot iron out the differences

and from another reviewer

I have a problem with the fact that differences in the language of a number of countries are simply ironed out under the umbrella name of "Latin American Spanish". The language of, say, Costa Rica and that of Mexico have deep differences.

I haven't had the opportunity myself to look at the book, but I'm honestly not surprised by these reviews. Both the positive and negative reviews acknowledge the uniqueness of Spanish as spoken differently in various parts of Latin America and the difficulties of trying to cover them in a single book.
Top

Here are a couple of pages from Lonely Planet's Lonely Planet Latin American Spanish Phrasebook & Dictionary (images are taken from Amazon's preview of the book). Note the use of abbreviations indicating various countries on the second page. (In spoiler tags because they are large images and I don't know how to make them smaller.)
► Show Spoiler 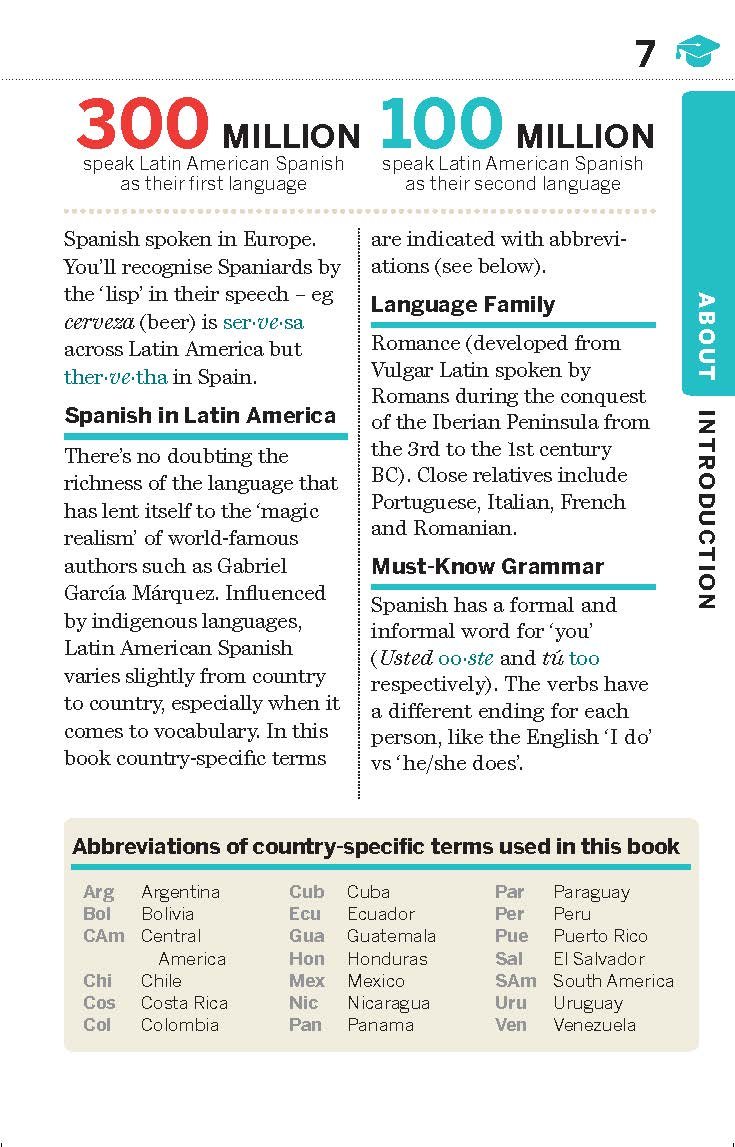 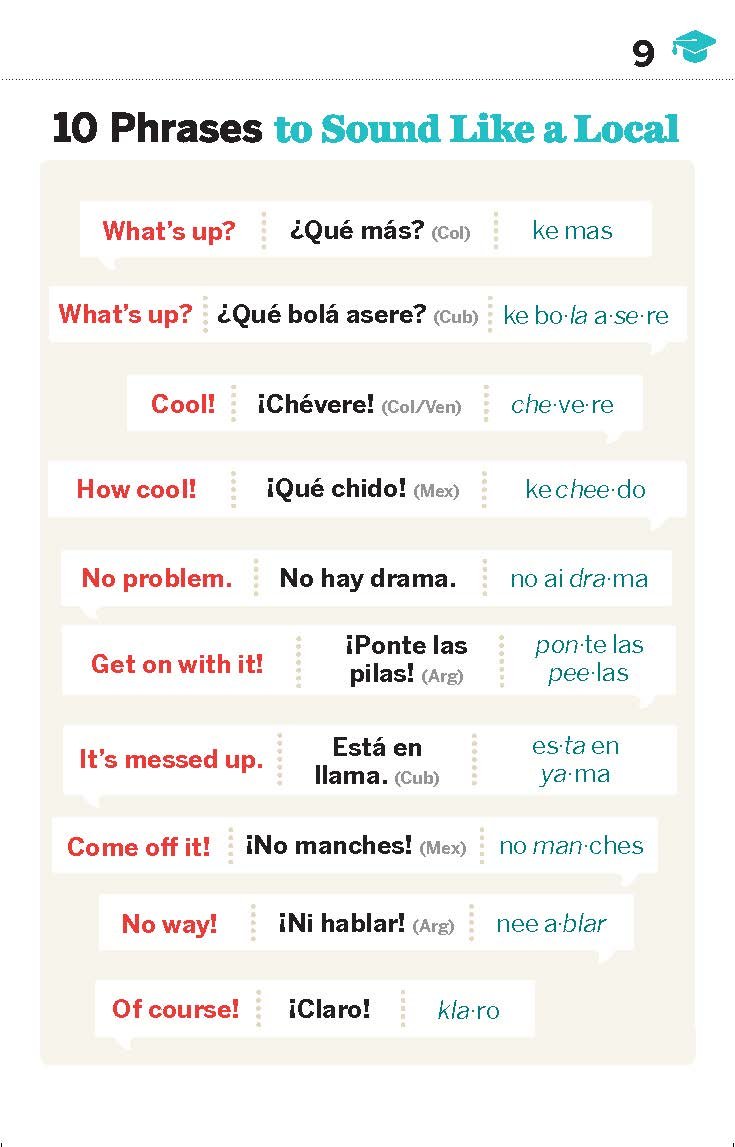 . This would give us a way to differentiate whether we are referring to any/all varieties of Spanish in general versus referring to a specific variety used in Spain.
There is basically a similar issue with many other languages, including English; even when you aren't referring to a country-specific variety of the language, it's necessary to choose one flag for it (British, US, Canadian, Australian...) even if that particular country isn't an exclusive focus.
Top

There's no good solution if we keep using flags to represent languages. Languages and states do not map 1:1.

(Lusofonia) having flags distinct from their member countries, but that's the exception and not the rule. Plus, they are not familiar to most people.

So my counter proposal is to keep the flag systel as it is to avoid major disruptions to our habits and old posts, and commit to using descriptors after the typically-genericised flags (sort of like what I did here) and the tooltip feature for lower priority clarifications such as in my sig, eg