It does. In Norwegian, it used to refer to lunch, but when the main/warm meal of the day shifted to the evening, they kept the word and used it to refer to dinner instead. I assume that's what happened in Swedish as well. Actually, in Norwegian it means both "midday" and "dinner", no idea about Swedish, though. It surely is confusing.
Please correct my mistakes!
Top

It does. In Norwegian, it used to refer to lunch, but when the main/warm meal of the day shifted to the evening, they kept the word and used it to refer to dinner instead. I assume that's what happened in Swedish as well. Actually, in Norwegian it means both "midday" and "dinner", no idea about Swedish, though. It surely is confusing.

Yes, it's the same in Swedish.

For the time of day, it means noon-ish.


For food, it can mean different things. This is the older schedule, the one I grew up with:


These days, people usually stick to this schedule though: 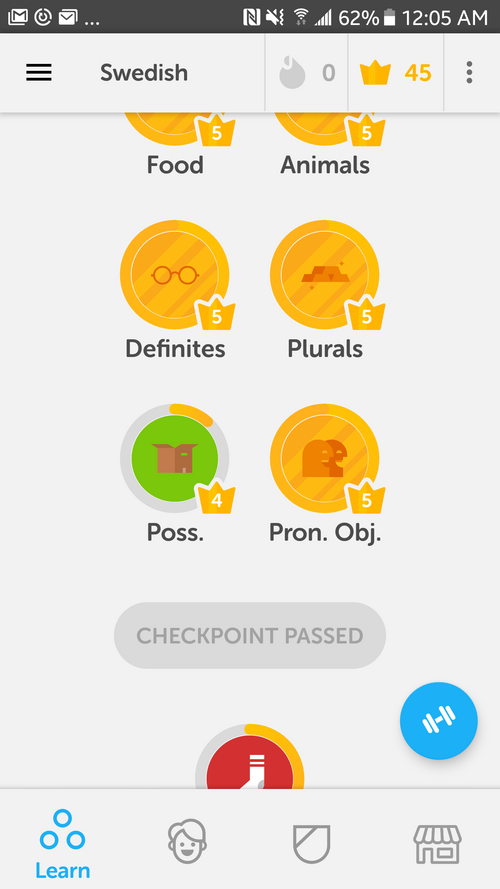 I'm out of here

It's been a while. The main reason I haven't made a lot of updates so far was that there weren't really much to talk about. But let's break it down a bit. Duolingo can operate on two very different modes:

Completing a skill for the first time on the web only gives Level 1 on the app version, and completing Level 1 on the app gives the full strength signal. This might be a common knowledge for the long-time users, but I just want to make sure we're on the same page.

The problem I see is:

For the skill strength ones, it's easy to make the mistake of going too fast too quickly. Testing with Mandarin, I was able to finish 1/4 of the whole tree in one sitting and there was no check. I felt like I was able to grasp the grammar well enough to give a near-automatic response by the time I reached Level 4 on most nodes, which equates to some 25-40 exercise reps. And this was Swedish; for the languages that are widely different, this may take more. I actually finished "Basics I" on Irish just to test; I believe it took 35? exercises to finish that one node to Level 5, but I still wasn't completely sure if I understood everything correctly.

The skill level based ones, while they are brutally repetitious, it gets the job done. And as a low-maintenance way of acquiring some A2 competence at the end, and if you don't mind spending 10 minutes per day for the next two years, this might be your thing. This is not a sarcasm; this might really be your thing. And as you finish one node at a time, which can require up to 60 exercises per node (the highest I've seen), that really gets ingrained to your cerebrum. This is not a bad method.

The problem comes when you try to move a little faster with the skill-based ones. I'm on the phone. This is equivalent of texting how many freaking messages per day? Only doing 5 exercises can easily equal to 50-80 messages that you have to text, and if you want to try to pace up, you just need to text more.

This creates an ergonomic problem.

I don't know about you, maybe for some, texting on the smartphone is the primary method of communicating with people. But for me, this hurts. Physically. I have been feeling increasingly sore on my hands, especially the joint around my two thumbs.

The goddamn app needs to hit a right balance. The web version has little check to protect yourself from ... well, yourself, if you move too fast. The app version moves too slow and this can hurt you, physically. And the biggest problem I see is the separation of the two modes, the progresses made on one side don't really get reflected on the other side. Let me ask a perfectly legitimate question:

What the fuck were you thinking?

If you're going with the whole idea of gamification, you need to consider the gamer mind first. When I see nodes with incomplete levels, I want to fill it up, to go for completion; that's just what the gamers do. I don't want to complain too much about weird sentences, though there are; typing "it is its dishes" in English doesn't sound like I'm tying good English, but still, I can accept a degree of translationese especially for the low levels. That's not the problem; if this is meant to be a gamification of learning languages, Duolingo needs to learn to manipulate the gamer mind a little better. If I know doing anything on the web is not going to give me higher level crowns on the app, am I even going to bother? Is there an option to show me the crowns instead of signal strengths on the web version?

All in all, this experiment is over. I don't think I'm going to delete the app just yet, and I might continue on with Swedish, as this does one thing exceptionally well: Doing just a few lessons every day, however slow, is a very low-maintenance way of slowly building the basics of a language. But not for a while. I'm physically feeling pain now. I think I gave it an honest try it deserves at least.
↑ ↑ ↓ ↓ ← → ← → B A
Spoiler Alert: Turkish | -30 Thai | Sink or Zapotec
Top
Post Reply
25 posts