vijayjohn wrote:I feel like people who support monarchies must not know their history too well. I'm pretty sure my dad feels the same way. Monarchs did some awful, fucked-up shit.

Oh yeah?? Name six that were as bad as Saddam Hussein!! :wink:

That's like every Bollywood movie I know ever. Unless Indian movies that actually have strong plot lines count. I didn't really like the music, I don't think, but it's definitely better than a lot of the ridiculous garbage that came out later. All that "hello madam, I am your Adam" and "hola amigo sabko salaam" and "TV chale remote se, bivi chali hain note se" and "kaisi freaky freaky Friday night" BS. (Not to mention all the corny BGM in English. "She's so cool, she's so fine, out of ten I'd give her nine!").

mōdgethanc wrote:Oh yeah?? Name six that were as bad as Saddam Hussein!! :wink:

Wait, why are they as bad as Saddam Hussein?

Genghis Khan, sure I'll give you that; he was a warlord who conquered Asia and is said to have governed fairly but also killed a lot of people. Salman, he might be repressive as hell but he hasn't committed any atrocities as far as I know. I don't know much about about Aurangzeb. Victoria presided over a massive empire so some fucked-up stuff must have happened on her watch, though I don't know what it would be offhand. I know very little about Ashoka and thought he was semi-legendary. Peter the Great I know was a brutal guy but also modernized Russia and is seen as the prototypical "enlightened despot" though that's a trope I generally think is bullshit.

I'm especially interested in the Indian rulers because I don't know much about them. My knowledge of Indian history is very hazy before the 20th century, I admit.
Top

mōdgethanc wrote:Salman, he might be repressive as hell but he hasn't committed any atrocities as far as I know.

He helped crush Arab Spring protests both at home and in Bahrain and became the first Saudi ruler to bomb a foreign country since the (First) Gulf War.

I don't know much about about Aurangzeb.

Aurangzeb was a Muslim fanatic who wanted to eliminate all other religions from India but Islam. He imposed taxes on non-Muslims and sharia on everyone; destroyed a lot of temples and even some mosques; forced people to convert to Islam; executed a Hindu ruler, a Sikh religious leader, a Jewish convert to Islam, and most of his own brothers, including his oldest brother whose head he had presented to him on a platter; imprisoned his father, Shah Jahan, who then died in prison eight years later; had his nephew who was slightly younger than us poisoned and strangled; murdered said nephew's wife and baby daughter; and generally terrorized Indians so much that we view him as a monster to this day. (The very first thing I ever heard about Aurangzeb was from my mom. It wasn't that he was a king or an emperor or Muslim or anything else; it was that he was just really bad). There were so many rebellions against him that the Mughal Empire crumbled within seventeen years of his death even though he had just expanded it. He also apparently had zero appreciation for art yet encouraged the textile industry; I have no idea why.

Victoria presided over a massive empire so some fucked-up stuff must have happened on her watch, though I don't know what it would be offhand.

Under Queen Victoria, the British exiled the last Mughal emperor to die of typhoid in some random swamp in Burma and murdered his three sons in cold blood at the gateway to Delhi. Then their corpses were covered with a shroud and put on display at Delhi's biggest market, and Victoria declared herself Queen of India. She also endorsed a foreign policy that led to the Anglo-Zulu War and the Second Anglo-Afghan War. The Boer Wars also took place under her watch. She had two random Indian dudes hastily selected as personal servants and once said being shot at was proof that she was popular.

I know very little about Ashoka and thought he was semi-legendary.

Ashoka is well-known for being the first Indian ruler to convert to Buddhism and also spread Buddhism and implemented some of its principles into the law, but this all came after what everyone seems to agree was an extremely brutal conquest of most of South Asia. IIRC he turned his own capital into a prison or something, and he gained the throne by tricking the heir apparent into falling into a pit of live coals. There is also a story that he once burned his entire harem to death when some of the women in it insulted him, and he is also said to have been a sadist. Most notably, Ashoka conquered Kalinga, a parliamentary democracy (thereby making it part of his empire, which of course was an absolute monarchy), and killed at least 50,000 people in the process by his own records. Then he converted to Buddhism.

Peter the Great I know was a brutal guy but also modernized Russia and is seen as the prototypical "enlightened despot" though that's a trope I generally think is bullshit.

It is bullshit. You'll notice that this is also pretty similar to Atatürk. Some people seem to think brutality is okay as long as it's in the name of modernization. I don't.
Top

My updated answers have changed since last time. I don't understand the results this time

Seems accurate enough all things considered, but... if I keep becoming more liberal and more left-wing at this rate, two years from now I'll literally be at the very bottom left corner of the fucking thing and will have to for real finally find some way to actually kill myself before someone else does it for me.

This test is pretty good, but it still falls short for some political types. Like me, I'm all about

autonomy for people; not liberty but autonomy
self-reliant government that feeds itself through taxes and indirectly supports its citizens anti-war policies
minimal police force; constables would be sufficient

I'm sure of how it must be off the books. That anarcho-communists and green anarchists would likely choose Green Party if they had no other options, say, during elections

I don't really consider myself an anarchist, but I'd probably just call myself a Green as everyone seems to know what that is

That sounds like a libertarian/minarchist government to me. Autonomy is more about freedom from outside forces I find.

The test is pretty bad, I've come to realize, for a lot of reasons but the one no one ever seems to mention is that it counts being anti-religious and secular as being anti-authoritarian. Yet there have been lots of regimes in history that were atheist and had no religious freedom and the religious were persecuted, whereas there have been lots of religious movements that were anti-authoritarian. Religion does not always mean conservative or traditional.

Other than that a big problem is that it defines right-wing as capitalist which makes sense, but also specifically as free-market capitalism, meaning that state-directed capitalism (as seen in many East Asian countries) which is common in authoritarian right-wing regimes can't easily fit on the left-right scale. This makes no sense since they are careful to describe the difference between state socialism and libertarian socialism on the left, but don't do the same for the right. This is probably because the creators of the test are leftists and focus on neoliberalism (free-market ideology) being their opposite without taking into account that there are other kinds of capitalism that they would find just as bad or even worse.

I still like the political model (and the memes) but it needs some serious tweaking before it's accurate. My favourite test I've found is Politigram since it's the same model but with less vague questions, and it's short but I find it's very accurate. Also it adds a third axis for traditional-progressive cultural values which load on the y-axis in the original test, which is flawed for the reasons I said above when talking about how it treats religion.
Top

Eh, figured I'd do it again just so it's documented here. 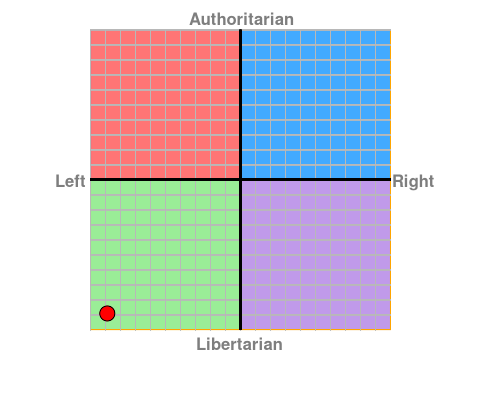