Are there kanji lists out there that sorts kanjis by theme? Many learners of Japanese (me included) find comfortable learning kanjis of the same concepts or themes, and such lists could prove very helpful to us.

but on a larger scale, and one which includes the readings, both Kan-on and Kunyomi.
Top

I am currently working on something similar in my final thesis - kanji categorized into around 75 mostly semantic groups, however my system makes use of fundamental components and on readings as well. I will show you some "samples", as the thesis has not been published, yet. For example, the first group representing "numbers" without having the uniform fundamental component looks like this:

仁憶眺挑跳 = visual-reading companion characters ... not related to the group semantically, but they share the same component as one of the chief characters + at least one same on (Sinojapanese) reading

- most of the groups actually share the same fundamental component (radical) as well:

Btw, the (mostly) semantic ordering of the groups of the system mentioned above looks like this: 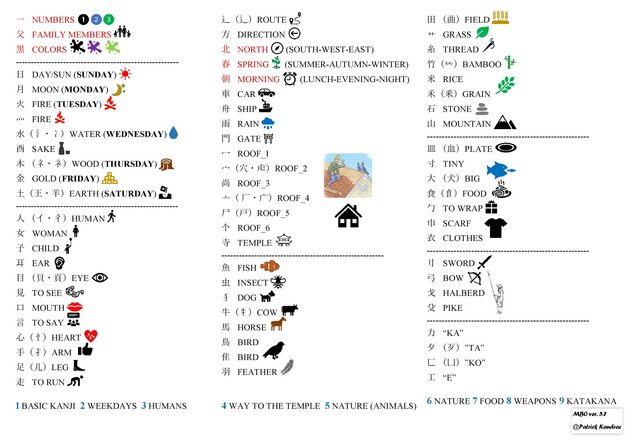