So, I’ve learned that today is “Kekri day” in Finland, and I thought it could be a good idea to start a post about different cultures and traditions in Finland, that could also help us to practice the language

I also found a program in Karelian language, about the same tradition (I guess, because I still haven’t finished to watched it) but with Russian subtitles, that could be useful if you don’t understand Finnish very well (like myself

It's not kekri day as such because there wasn't a fixed day for it: it was celebrated around October and November. I don't know but I would imagine it depended on the harvest because that's what kekri is about: celebrating the end of summer and eating what you've harvested. Sadly, Christianity somewhat destroyed the tradition and replaced it with pyhäinpäivä, which is today. It's a day for remembering saints and all the dead relatives of your family. Originally, it was two Christian celebrations that were combined after reformation. People bring candles to their family graves but as far as I know, that's it. Kinda lame if compared to what kekri used to be.

It seems some parts of Finland have a living kekri tradition, like that kekripukki Kajaani has. I've also seen lots of comments lately where people complain about "the American Halloween" and say that we have kekri, it's ours, and we should stick to it instead of copying others.

Personally, the first time I heard of kekri was in school when the school canteen was filled with decorations and the lunch menu was harvest themed for the whole week. I liked it, and after some research to find out what it was, I learnt that the tradition of eating ham in Christmas is actually a kekri tradition. It made a lot of sense because pigs were slaughtered in autumn. FYI how I know this: every time I was reluctant to eat something as a kid, mum would tell me "syö, syö, sika, syksyllä tapetaan" - eat, eat, pig, you'll be killed in autumn. It's a real proverb, btw. #happychildhood

Wikipedia has an article about kekri in Finnish and in English (although it's a much shorter version) if you're interested. What I found interesting is the weird love of goats: we had a kekripukki, who went form house to house to ask for food and checking that all the harvest work had been finished, and nuuttipukki, who did the same but asked for food/beer left from Christmas. They're also the reason why we call Santa joulupukki aka Yule Goat. It might also explain why our Santa comes to visit the family in the evening and gives the gifts to your hands rather than leaving them in secret at night, but I think it's the same in Sweden (and probably elsewhere in Scandinavia) and I've heard Russian Ded Moroz can visit people's homes, too, so there's probably more traditions than just our own behind joulupukki.
Top

Penkkarit (or penkinpainajaiset, 'pressing-the-chair') is the last school day of the 3rd graders in high school (or lukio). The name refers to the reason why their school year ends so soon: they're given lukuloma or a break for studying for the final and most important of their exams, the matriculation examination. The break is indeed needed because these exams will cover everything that has been taught during the three years the students have spent in high school. The grades will also determine who can continue their studies in university, which doesn't help with the stress at all. If you're interested, you can read more about the matriculation examination here.

But before the nervous last-minute-studying, the students take everything they can out of their last day in school. The exact traditions vary school by school, but usually the day begins with some sort of tricks or mischievous plans carried out by the 3rd graders. For example, interrupting lessons and "redecorating" the school are more or less popular things to do. 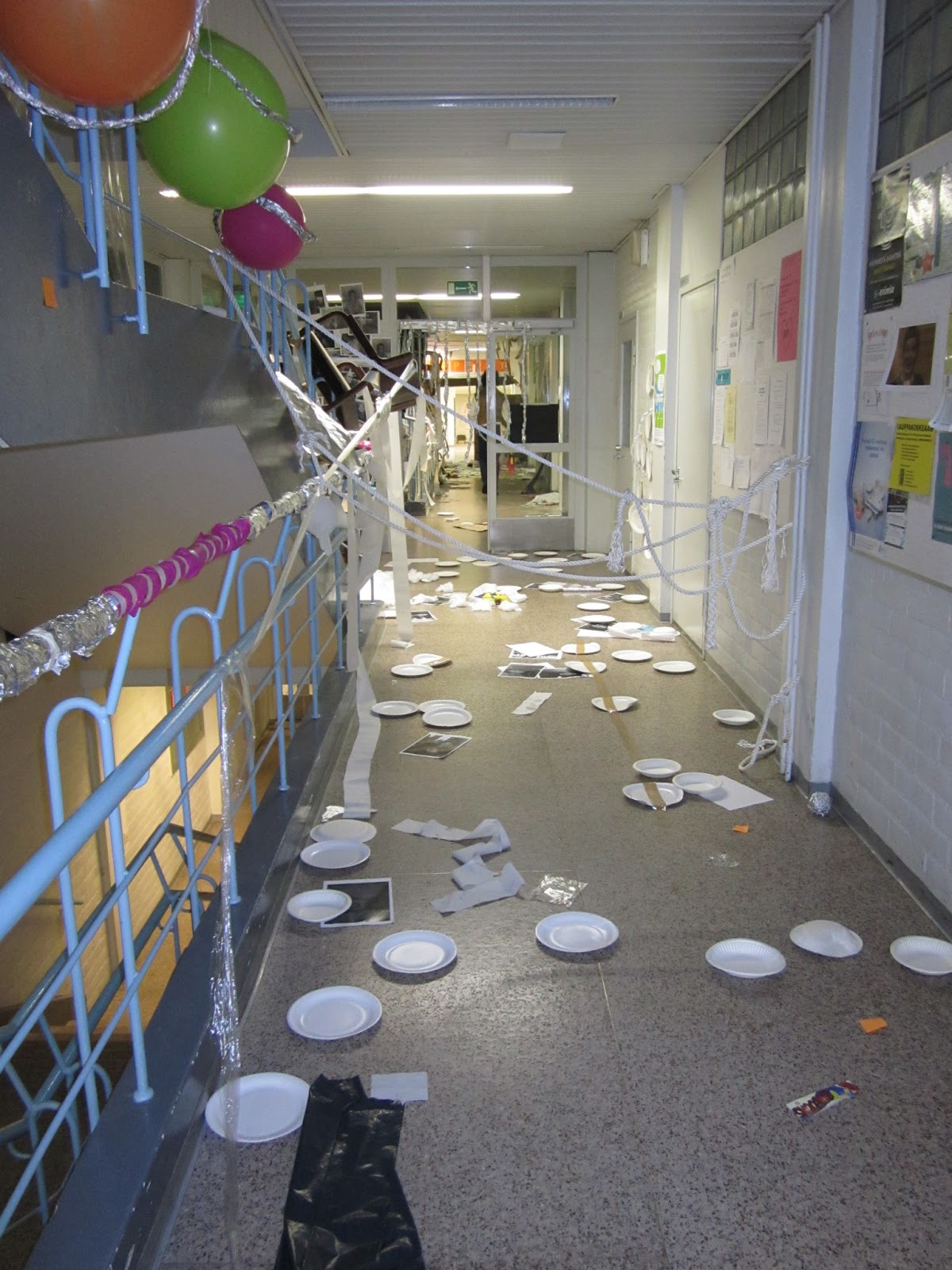 Picture from Lotta's blog.
My school had a tradition of letting the 3rd graders do the morning greeting, which is usually a short speech followed by music and broadcasted via the school tannoy system in each morning. Well, our music teacher had a CD full of folk / aboriginal music across the world - everything from Mongolian throat singing to American folk songs. We took the CD, put it in the player and went to the gym hall to prepare for the rest of the day. Later on, a friend of mine (who was in the 2nd grade back then) told me the teachers had not stopped the music as we had thought they would, but instead they let the CD play for the whole hour while they continued with their lessons like nothing was out of ordinary.

Another thing the 3rd graders like to do is to reward the teachers in some way. It can be a play or a humorous short video or parody songs that are sung to the school - again, traditions vary. In Southern Ostrobothnian high schools, the students most commonly sing well known songs with their own lyrics that describe the teachers and the staff. The 3rd graders dress in folk dresses for this, which is not done anywhere else in Finland as far as I know.

If you can't find or don't want to wear a folk dress, you can also wear jussipaita. Although it's not official folk clothing, it's become something like a symbol of Southern Ostrobothnians. You can see a few jussipaitas in the picture above if you look closely.

Picture from Wikipedia.
The best part of the day is the truck ride. The 3rd graders dress up in costumes*, get on trucks, and throw sweets to other students, pupils, and people who've gathered to watch as the trucks go around the city/town. The routes are usually planned so that the trucks will visit school yards, so that the kids won't miss it. (After the trucks are gone, the kids always count how many sweets they got. There's always some poor soul who didn't get any or only got a few. At least my teachers gave their sweets to those kids. I'm sure there's some way of balancing out the sweets distribution in other schools, too.)

The trucks are decorated with banners* that the students paint themselves. There are some popular jokes that circulate every year, often based on the word abi (short for abiturientti, a 3rd year student). One very common theme is joking about your own lack of skills, how little you've learnt, or how you plan to take the exams easy. Memes are a big source of inspiration, too. Some jokes refer to the school the students are from, often making puns with the school's name. Some refer to politics in satirical way. Sometimes the jokes can be a combination of all of the above.

* not every school has the costumes / banners. When I was on the truck, we met a truck from another school which had neither the costumes or the banners (the truck had its own ads, which they weren't allowed to cover). You can imagine how much we yelled and jeered at them.

MAOL is basically a cheat booklet you can take with you to maths, physics, and chemistry exams. It's almost like a good-luck charm for many; at least nobody in my class was ready to leave it home even when our teacher claimed we wouldn't need it in our exam.
Abitti is a digital course exam system that is used for course exams and the matriculation exams.
YTL is the Matriculation Examination Board, which everyone "hates". They're the ones who will make and grade every matriculation exam taken by the students. More info here.
After the ride, the students go to a cruise. The main point is to drink, party, and spend time together. The cruise goes either from Turku or Helsinki to Stockholm and back, or from Helsinki or Turku to Tallinn, where the students spend the night in a hotel and party in the city. I'm very sorry for the citizens of Tallinn...

The next day is the time for vanhojen tanssit (also known as wanhojen tanssit, wanhain tanssit, vanhain tanssit or simply wanhat). Since the 3rd graders are gone, the 2nd graders are now the oldest in the school. To celebrate this, they perform ballroom dances to their parents and to the students and pupils of nearby schools. The dances chosen for the performance vary by the school, but I doubt you could have wanhojen tanssit without Cicapo or Kehruuvalssi! (Warning: these are both earworms.) The students have also created their own dance, which is meant to be funny and entertaining. The dancing takes the entire day: because everyone wouldn't fit in the same room at once, students usually give 2-3 performances in total for different audiences. In some schools, the students and their teachers go to have drinks together after the dances; but quite often, the students will spend the rest of the evening in their own groups of friends.

Dance made by the students
https://youtu.be/ncdHSZ9glGI
Top

That’s amazing! I didn’t know. Thanks for sharing this information